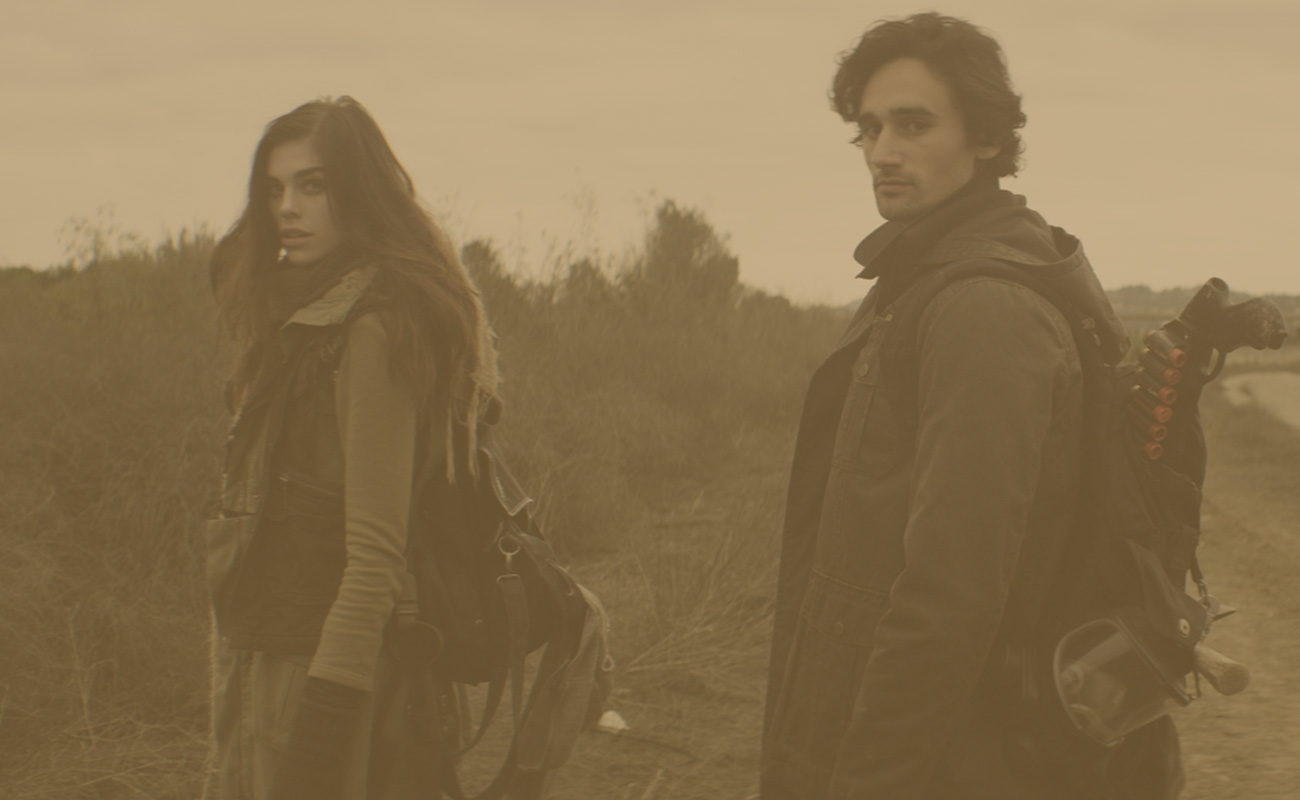 We sat down with Alexandrov to discuss the intriguing undertones of his film Not Over, Till It Ends Within:

Alexander, please describe Not Over, Till It Ends Within in your own words.

The story is about a young couple walking through the world after it’s ended, in search of a new beginning. It’s a fashion video at this point. It’s raw, unpolished, and perhaps amateur at certain marks. At this stage I want it to be seen like that, and I’m working on a small narrative part to it to follow up.

To me the project was about the “creative pursuit” of any human being.

We each have a light burning within us and sometimes life takes over and these lights go bleak or burn out completely. Throughout the film, you see the heroes walking through different landscapes. It’s more of a tiptoe than just a one-dimensional walk of hardship. There are beautiful sensitive moments in it as well. It symbolizes an artistic struggle where at times one needs to push forward hard and at other times just stay calm and observe, always do things with care. In the end of the film our heroes light up a locator flare, which speaks for that internal light within us, being broadcasted, shining bright to be noticed and understood. It screams from the soul: We are here, we’re beautiful, we want to be noticed and understood. Essentially a broadcast of any living spirit.

What other sources of inspirations influenced you to create the film and direct it the way you did?

I wanted to pay a tribute to the Light inside every human being - to pursue whatever it is they set on to in life. I wanted to say to people to not give up and have hope that they will eventually be noticed and understood. It’s a part of my own personal struggle and perhaps of any creative person.

There is a quote from Stephen King which I adore that goes like this:

“The most important things are the hardest to say. They are the things you get ashamed of, because words diminish them — words shrink things that seemed limitless when they were in your head to no more than living size when they’re brought out. But it’s more than that, isn’t it? The most important things lie too close to wherever your secret heart is buried, like landmarks to a treasure your enemies would love to steal away. And you may make revelations that cost you dearly only to have people look at you in a funny way, not understanding what you’ve said at all, or why you thought it was so important that you almost cried while you were saying it. That’s the worst, I think. When the secret stays locked within not for want of a tellar but for want of an understanding ear.”

I think our film says this visually and I hope all creative artists get not just noticed but understood for their work.

Models Ross Blakeman and Raina Hein seems to fit the roles perfectly. Raina being quite known for her appearance in America`s Next Top Model, did you have her in mind for the role when coming up with the concept?

Well, I’ve always wanted to work with Raina. Her look was actually my first choice for this project and I was super excited that she agreed to do the project after I approached her with the concept. Both Raina & Ross were super kind and supportive. I only met them in person on the day of the shoot and things couldn’t have gone better. There’s authenticity to their work and look which also translates onto the screen.

How about the rest of the team? Have you worked with them before?

Elisabet Mascorro (makeup/hair) & Sean Panella (stylist) are also good friends. We’ve done a few passion projects together and it was a pleasure to co-create this one with them as well. They have a great peaceful energy and are a great pleasure to work with.

Say a few words on Sean’s amazing styling and how it fits into your post apocalyptic setting?

Sean Panella, while being a fashion stylist, takes more of a film-world approach to it. His choices come from visual authenticity 1st, branding 2nd. He can put together an amazing wardrobe that is still very authentic to the character and rip it up or dirty it up if it calls for it. I really enjoy working with him, he goes for the heart of things 1st, perception 2nd. I know a lot of the pieces he handpicked over time from various sources, often just noticing things and keeping them for the right shoot.