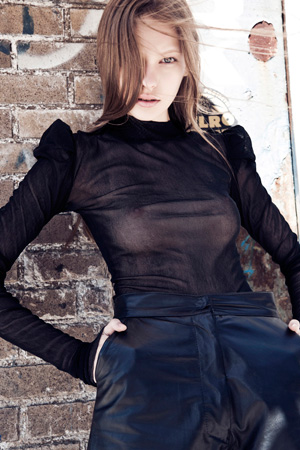 It’s almost been a year since we showcased some of Pino Gomes‘ wonderful work here on Ben Trovato. Since then he’s relocated from Zurich to the fashion mecca that is New York City. Last time he spoke about inspirations such as the South American ocean breeze, and sex and sensuality. Today Pino tells us of a deeper more insightful source of inspiration: “- I have been driven by the lust to portrait visions of my ideals of perfection, in different moments of my life. I have always been the quiet one, the one who didn’t drink beer, and who got high scores at school. But secretly, I envied all those guys who were rebellious and broke all rules, it wasn’t me at all, but could be my alter ego, that is released now in form of my photography.“

That brings us to his first fashion editorial for Ben Trovato, Rebel Old School. Jullien Herrera is the star, while Julia Dalton-Brush did hair and make up, and Pino the styling. He describes a fun day at set: “- We had a lot of fun and enjoyed ourselves while creating the 90′s mood envisioned!”

“Gathering the clothes to frame this story, as a photographer, was a blast, and I had fun remembering the 90s.”

The story was shot with the Nikon D-3x.