Life experiences shape you as a human being and as an artist, and will therefor help carve out the way express yourself, both personally and artistically. For Nicole Anne Robbins, some of her life’s most significant experiences came at a very young age, something she thinks made her into the artist she is today. She was born a twin and was raised on a farm in Central California. Her house burnt down when she was only 6 years old, and by the age 9 she had written a book, and had a camera in her hand at all times. “- My imagery - I think - explores all of my life’s experiences, such as the landscape I grew up viewing, the camaraderie of being a twin, and the highs and lows that come with being expressive and emotionally sensitive.”

Do you think this is what makes your work special? “- I am aware that my work is evocative and intimate. The models I shoot I often times become close with them during the shoot and stay in touch for years, and I assume this immediate friendship, admiration and unconditional love on both sides shows in the image making it special for the viewer. Also I think my images can be interpreted many ways. This I find very amusing!!

I guess to summarize, maybe my work is special, because it is all just self portraits of myself, but the camera is pointed at somebody else, and I have them emote what I am feeling or wish I was feeling. For example, a boyfriend sent me an email which I read during a shoot that made me cry uncontrollably, and I told the model what I was feeling and asked her to perform for me the most happy and silly behavior to take my mind off of this person….. I think it is this type of openness on both ends of subject and director that makes the images worth looking at more than once.” 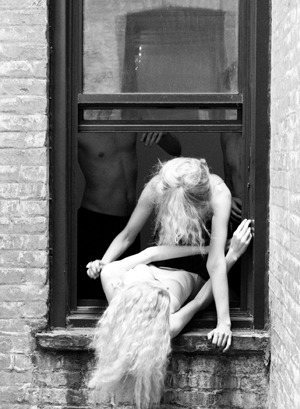 Click the image to see the film by Nicole Anne Robbins

With that in mind Nicole Anne shot her first Ben Trovato story, titled The Virgins. “- It’s a story of art imitating life!! Does one want to be watched by others and have their moments inspected without notice, really and truly? OR I should rather say: do I? I truly feel lately like a girl dancing with no care of how I come across, in front of a window with no coverings, as is true to real life, and true metaphorically.”

The Virgins features Therese with Marylin, Joe, Nick, Bryce, and Edythe with Ford, sharply styled by Lala Lopez using fashion from Henrik Vibskov, Mjolk, and JBNY among others. Vasileios Kokkinidis did their hair and makeup.

The story is in two parts, one in still images, the other in a video. The video is out! See it here.

Nicole Anne learned photography manually, has spent hundreds of hours in darkrooms, and have thousands of prints that her mother keeps safe for her. “- This type of publication is what I feel is valuable; the printing of ones own work, for personal pleasure.”

Speaking of, in which other publications has your work been published? “- My work has been published in a few arenas online and print, but I am realizing what little importance this is holding in this era of photography with so many magazines online, and the major magazines I grew up loving are failing in this economy.

If my work ever gets published in Vogue Italia, I will speak about it until my friend’s ears begin to bleed. You see, I think I am a dying breed of romantic that holds all of this very close to me. ”

I am very picky about magazines publishing my work, and understand this is strange, but I truly do photography for myself and to amuse my father and sister -at the same time, realize that it is job, but that is not the first priority and never has been.

Other than shooting for Vogue Italia, what are your plans for the future? “- Every part of my future is in the second at hand, and can only result in ‘in the moment’ actions or inactions.

I am not and have not been following the path of what is expected, and plan to keep making up my own rules to suit my happiness and clear state of mind first and foremost.

In the future viewers will see more documentary implemented in my fashion works, more narrative and words and real life in my video projects, and the same intimacy that has always been a part of my collection of work. ”

She can also reveal that there will be a book of her images to purchase in the near future, explaining where she was emotionally in her life when the photos were taken. “- This is something I am very nervous about exposing, but excited at the same time to reveal, because it is fascinating even for myself.”