Spring is finally surrounding us, and the fashion world is letting the impressions of the Fall 2012 fashion weeks sink in. It is now directing its full attention and preparations towards next season’s fashion weeks after a long needed summer. During the NYFW in February we covered the event’s every split second in our Faces Of NYFW campaign, and presented priceless fashion moments from the streets, front row, backstage, and even the late night parties. What becomes apparent when being submerged in the events at a fashion week is the extremely high pace at which everything is conducted. You are constantly on the move, trying your best to catch up.

But if you think attending fashion week is hectic, try being a runway model for a day. And that’s what we did. 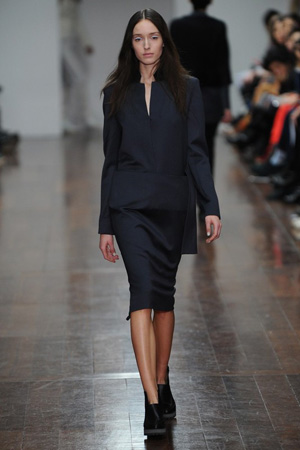 Julia walking for J JS Lee the day we followed her. Photo by WWD.

For London Fashion Week last February we teamed up with M and P Models, one of the most influential model agencies in the world, in order to give the Ben Trovato readers an exclusive look into the life of a model during fashion week. Our photographer Jessica Klingelfuss followed German model Julia Oberhauser for day as she got up in the small hours, went from castings to castings crossing London multiple times, getting ready and walking shows, and then of course ending her day with a glamourous party. The result: 18 exclusive images telling the full and whole story.

“- I think following Julia for a day is as close to The Amazing Race as I’ll ever get!” Jessica says. “We got off to a very sleepy start with an early call time. I followed Julia as she prepped for a big runway show, I had already mentally prepared myself for how much waiting there was going to be as this is also the case on shoots, however I most certainly was not ready for how mentally and physically taxing castings are. Agencies send their girls a list the evening before with a list of clients to visit, at certain time frames, and often they find themselves going literally from one end of the city to the complete then back again, over and over throughout the whole day. This of course was all forgotten the moment we met up at an exclusive fashion party at Whisky Misk.”

Press Officer at M and P Laura Pegg agrees that the days can be exhausting for the models during fashion weeks: “- During Fashion Week a good working catwalk model usually has around 20-30 castings, some of them requests, some of them open castings. The girls have to wait for a long time when attending open castings, since there are so many girls in town and the competition is huge. After the castings there are fittings with the designers that are interested in the model for their show. These fittings can easily go on for hours until the early hours of the morning! Call times for the first shows are around 5am, no matter what time the fitting finished the night before.”

“The girls will have to run from one show straight to the next, sometimes castings in between and then fittings again after, the cycle keeps going on like this everyday.”

What surprised Jessica the most about seeing LFW through the eyes of Julia was how she remained so positive throughout the whole day: “- This despite how grueling it was. And how fast of a walker she was, I could barely keep up! She just powered through it though she was incredibly happy that I had an iPhone with the London bus schedules and a GPS map and I was happy she had an umbrella! It was definitely a team effort, I’m amazed especially how such young talent comes in for overseas and have to learn how to navigate a huge city in a matter of days.”

Laura agrees, adding: “- Most people do not realize how busy and hectic models are during fashion week, people generally think of the life of a model as something glamorous but this is not the case when they have such a packed and busy working week. These photographs of Julia portray that no matter how busy Julia gets, she always has to look stunning and be ready to work hard constantly for the entire week.”

“She was wonderful; a real sweetheart and absolute professional,” Jessica tells us.

“I witnessed firsthand some legendary diva behavior backstage while shadowing her (including a catfight between two supermodels!), yet Julia remained very calm and polite to everyone she came across.”

“Not once did she show an iota of annoyance at being poked and prodded and pulled at for three hours during hair and make-up for her show. Or even after the six hours we spent running around London, often backtracking on ourselves.”

LFW lasted for five days, we followed Julia for one.

“I honestly had never felt so drained after a day of shooting in my entire life. Brutal.”