Montreal based talents Valérie Boulet and Jose Enrique Montes Hernandez, otherwise known as MarquisMontes, prove to have mastered the art of fashion photography. Partners in both work and life, the dynamic duo both claim that, “Fashion photography was their calling, not only for the creative liberty in which it enables, for mostly for the story telling aspect, that propelled them in this particular field.” Which is easy to agree with, being that we here at Ben Trovato were instantly drawn to their Lola.

“Lola was inspired from the novel ‘Lolita’ by Vladimir Nabokov and the film with the same title by Stanley Kubrick. Leaving the dark and grimy aspect of the story behind, we concentrated our interest in the actual character: Lolita, youthful, naïve, nonchalant but equally seductive, endearing and quite aware of her sexuality. We wanted to create ‘a day in the life’ of this intriguing character, trying to showcase the duality and complexity of the carefree temptress.” 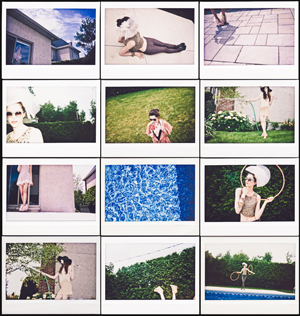 Polaroids from the MarquisMontes shoot

The two were also lucky enough to work with a model who willingly delved head-first into the character, “The model is Frederique at Next Models Canada. She exuded confidence, but was still very approachable and had the kind of retro look we were looking for. It was such a pleasure to work with a true professional, a chameleon, capable of embodying the many facets of Lolita’s character.  We were literally fighting for the camera…wanting to capture all the beautiful moments being created by Frederique.”

And if that wasn’t enough, Ve Goguen the team’s stylist proved to have added the finishing touch, with her eclectically styled looks, highlighting all aspects of Lola’s character. And both Marquis and Montes agree:

“In order to create a successful fashion story, you need a strong team, and Montreal is filled with talented and generous artists, masters in their own fields.”

Ben Trovato was lucky enough to catch up with Ve to get a quick take on her contributions and thoughts when it came to the fashion aspects of the story, “The inspiration really came from the character Lolita that I envisioned in a classy setting with a luxurious lifestyle. She is a charming and mischievous youthful girl playing dress up. I wanted her to have an elegant look but with a flirtatious edge and a nonchalant attitude. The clothing I selected had to portray a sweet girl image but with a edgy elegance. I wanted her to be casually chic like this is just another regular afternoon chilling in her man’s backyard. The accessories like the fabulous hats and jewelry seemed like an appropriate way to enhance Lola’s alluring style. The feminine clothing in sombre pastels creates her classy image while the swimsuits and wild accessories show her wild and seductive charm.”

And when asked what M.M wanted people to take away from seeing Lola they had only one comment when it came to the finished product, “We mostly wanted to play a game with the observer, kind of a ‘you can look but you can’t touch’ feel, enticing people to look once and immediately want to look again. The important thing for us is translating the fun we had creating this story , if we can provide the same joy that we put in the shoot to someone, that what makes us happy and stronger.”