Ross Laurence. A photographer and a true nomad. After having spent most of his early grown up life traveling, modeling and doing other less interesting stuff for money, Ross felt a need to move over to something serious. “- I had a modeling contract in Asia for 3 months when i was 24- I got over there and realized that at some point I had to get serious about something- kinda like a quarter life crisis. I was in the process of manufacturing shoes in China at the time and i needed a camera to shoot product shots with, my dad gave me his 400d to shot them with- I picked up the camera and put the shoes down. When I got back to Sydney I asked around at some photo agencies about assisting- I did it for free for 6 months,” he says. After a the short period of assisting for free, he got a full-time position as the respected photographer Nick Scott’s assistant. During the three years under Scott’s wings felt he was ready to fly solo: “- Shooting from 6am till 6pm then going straight into another job got really tiring after a while and at the end of 2010 i decided to stop assisting and give freelance a shot,” he says, before adding: “- But under Nick is probably where I learnt the most- not just about technical things but how to be a working photographer- how to manage people’s expectations, and how to create a good working environment.” 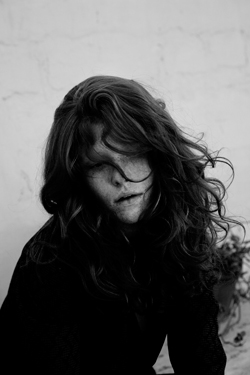 He travels more than the regular Joe, usually chasing the sun wherever it may take him. Currently he’s based out of Barcelona, which is also where the photographer shot his first Ben Trovato Exclusive story. Krysha Mira features the unique beauty Leonore Masson from our friends at Elite Barcelona, styled by Vladislava Belyaeva with a wardrobe provided by Zara, H&M, Lee, MNG and many more. Rudy Van Der Berg did hair and make up.

And this is how it all came together: “- I was up on our rooftop and noticed that the one next door was a really nice pale blue and the light in the afternoon was really nice so we decided to do a shoot there. We casted Leonore because we loved her hair color and skin tone- and she is completely different to any girl i have shot before. My stylist decided to use all blue which would complement Leonore’s skin tone,hair color and the location- We shoot all of it in just under 2 hours. A quick shoot is a fun shoot.”

Even though fun is a big part of being a fashion photographer, it isn’t always easy being and up and coming photographer: “- Well, I have been focusing on producing strong 8-10 page editorials whilst I’ve been traveling, which has been hard- buying clothes, shooting, returning, buying, shooting returning- on a really small budget, and sometimes going without dinner so we can get shoes for a shoot.”

That’s a part of being a young and promising artists, but what are your dreams for the future? “- Oh, I would love to assist one of the bigger photographers like Bruce Webber or Mario Testino. Education is one of the greatest things I can take from this industry- there are just some things you would never learn yourself or certain things that would take a while to figure out. I mean those guys are at the top of the game- it’s also about surrounding yourself in that kind of an environment. They are the best photographers in the world, working with the best stylists, models, and hair and make up teams. It’s even good to meet and work with other assistants in different fields because one day they will be the ones calling the shots.”

The industry is about connections and working relationships so i’m looking forward to building on that.

What about your inspirations, what gets your artistic blood flowing? “- I’m inspired by a lot of things I suppose- music, art, light, culture, movies, human behavior, the people I watch on a daily basis and personal experiences. Sometimes inspiration can come from the model I am casting, the stylist I am working with or a hair and makeup artist. As most creatives would say inspiration can come from anywhere- and it’s true. I try not to take inspiration from other editorials- though sometimes it can be hard not to- with the internet these days there is so much stuff out there that it can be a bit of a visual overload. It’s hard nowadays to be original and different- but I think photography and especially fashion photography is more about your personality and being able to work with other people in a creative environment, and manage people’s expectations.”

People want to go to work everyday and have fun- and enjoy the process along the way.