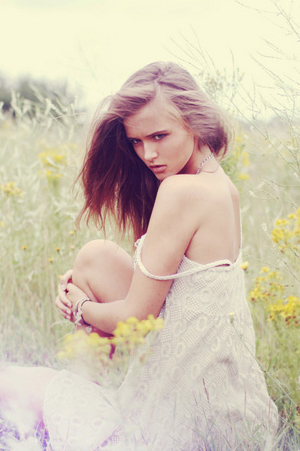 We’re happy to welcome back Amel Kerkeni to Ben Trovato. (You can view Amel’s earlier work on Ben Trovato here). Back on the blog this time she has produced an editorial piece for us entitled Harvest Moon.

She describes her own Harvest Moon story as a moment “of transition, of change, of evolution; as an ode to the seasons which transform our landscape, our environment, our light and our self-perception.” She goes on to add “My photographs reflect the selfish moment when you’re living your own story.”

When asked about the white, almost ethereal light that can suffuse her work, she replies that light is the tool she uses to create “an atmosphere of warmth and softness” for the story but that in the main, light for her should be “interpreted as the prism by which I can write and compose my own stories.”

She chose a location for the shoot that is very dear to her - “A little wild beach in northern France. I go there several times during the year, in every season. I find it changed each time. It reassures me. It always keeps its promises - a radiant light and an atmosphere of enchantment.”

Amel had seen Clémentine Lévy’s work with other photographers and they organised a test shoot together a few months before the shoot for Harvest Moon which encouraged them both to work together. Amel says of Clémentine, “She inspires me. She’s a muse. Her face is so special, so lunar, that inspires me in particular. She has a special light that she radiates. She has this mysterious side that I love. Moreover she is adorable, we had a wonderful time on this deserted beach.”

For hair and makeup artist Matvei Droulez, Amel also has praise. She says… “Matvei is young, talented and very enthusiastic, which is inspiring. He invested a lot in ‘Harvest Moon’ and despite the conditions (he had to make-up Clémentine in the car because it was too windy on the beach) the job he did was great. He’s also efficient, which is so important on a shoot.”