“- My friends, they inspire me even more than all of the above! You can see them in my pictures and I would like to thank them all,” Maria Kazvan said after having listed up things she finds inspirational. That was in October 2010. But Maria hasn’t changed, she collects memories through the lens rather than constructing fictional ones. So when the Lviv based photographer shoot fashion stories you know that what you see is real and honest. 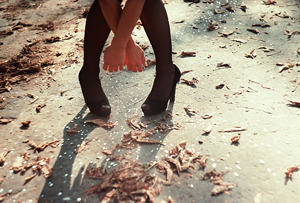 Maria shot Good Morning, Odesa, I Love You during her three days stay in Odesa together with model Tiya Neus. No makeup artist, no stylist. Just the two of them having fun. “- I mean, this is the way I collect memories: shooting other people. And this is a really good method, because I know, I always was on the other side of the picture. It’s even quite mystical, because I’m in that picture but you can’t see me,” she says before going on to explain the story: “- The aim of the shoot, I guess, was to show the beauty of the sea and the relaxing atmosphere of Odesa. Actually there was no idea or something like that. We spent three wonderful days in this town and those photos are my memoirs of all the sun and salt water I occasionally drank, because I can’t swim.”