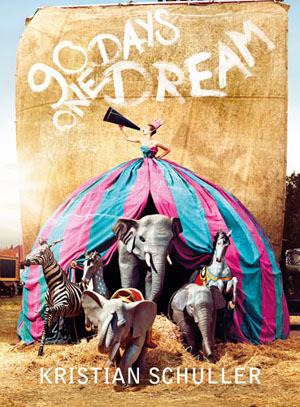 Although Kristian Schuller was ought to be a fashion designer, skimming the Paris fashion shows alongside his teacher Vivienne Westwood, things turned out differently when he was struck by his passion for fashion photography.

After his initial introduction by Isabella Blow to Condé Nast Publications in London, Kristian has continued working internationally with various fashion magazines and commercial clients. His work has been published in magazines such as Vogue Hellas, Harper’s Bazaar, Stiefelkonig and Vogue Gioiello ever since; and besides Gisele Bündchen, Amber Arbucci and Heidi Klum, Kristian also provided his work to Duran Duran to shape the Astronaut’s album cover.

Colourful, dreamy, surreal and fantastic, Kristian’s style is definitely well recognizable. In the 90 Days One Dream eBook, Kristian travels to the most beautiful places in the world, accompanied by young girls full of dreams. An unusual and exciting challenge for the fashion photographer that inspired an intensive fashion project. The result: A road movie of fantastically staged photo shoots, an adventure that for everyone involved became mainly one thing in the end – a dream.

Direct links to the eBook in your personal iTunes store: