The first time I spoke with Noam Griegst was in July 2009, a few days after launching Ben Trovato. At the time we hadn’t grown into the international publication Ben Trovato is today, and I never actually got to sit down and talk with Noam about him and his work. So when he contacted us last week and said he had a perfect fashion film for Ben Trovato, I made sure to get a little interview with him. 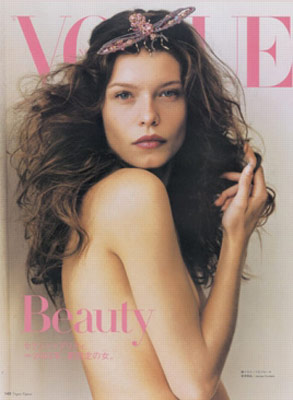 Louise Pedersen on the cover of Japanese Vogue, February 2004.

The Copehagen based photographer and film director’s film, Infinitas, is a dark and mysterious tale, featuring the infamous Louise Pedersen that has among other publications graced the pages of Vogue and Allure.

“Louise was great and I was so happy she agreed to do this project with me. She is inspiring and gave the film the sexy edge it needed.”

The film’s mood could be compared with Paul Minor’s Possession, a fashion film that premiered on Ben Trovato back in March, although Noam’s story is put to totally different environments.

Other than Louise’s presence, what things inspired you in the making of Infinitas? “- Well, my main inspiration was the Jewelry in the film. It’s also a tribute to my father and his work as a jewelry designer. But the film is really about getting lost in one self, about vanity, mystery and the ongoing circle: hence the title INFINITAS.”

You have a few films under your belt now, what do you prefer the most, photography or directing film? “- I like both but i am drawn to the magic of filmmaking.”

Noam tends to work with different fashion teams each time he’s making a film, but there’s one team member he’s worked with more frequently: “- I have worked closely with the Director of Photography, Ian Bloom, and there’s no doubt: I couldn’t have done this with out him.”

What’s next for Noam? “- Next up something bigger.“