Norwegian filmmakers Matias Rygh and Mathias Eriksen have worked together as a duo since they used to make skateboarding videos in their teens: “- We met in school where we bonded through our passion for skateboarding, photography and filmmaking. We have been working inseparably ever since.” The duo explain that they’re each others best supporters and harshest critics: “-The rule is that if one of us does not like an idea, it is not worth pursuing. On set, it’s a very simple and organic process, you could call it a symbiosis where duties and roles interchange.“

Their latest project, which recently caught our attention, is their new film for Norwegian jewelry brand Bjørg, entitled Heresy. “Heresy is a visualization of the universe from which Bjørg’s collection originated,” they explain, and add “A very specific scene comes to represent a turning point where it can be difficult to conclude whether it is just a tragic ending or the dawn of a new era. It allows a glimpse into a world where one’s perception of time and place is obfuscated, leaving room for curiosity and interpretation.”

Bjørg was created by artist Bjørg Nordli-Mathisen. Nordli-Mathisen grew up in the north of Norway and began making one-of-a-kind jewelry whilst living in India in 2004, and ever since Bjørg has been featured in publications such as Vogue Italia, Vogue Paris, Elle (France and UK), Marie Claire (UK and US), I-D, Dazed&Confused and many more. Bjørg releases two collections per year. All materials are 100 % natural and obtained in accordance to environmental preservation. There is a conceptual approach to all of her designs that encapsulates both previous and present collections as balancing acts between the fine and the raw. 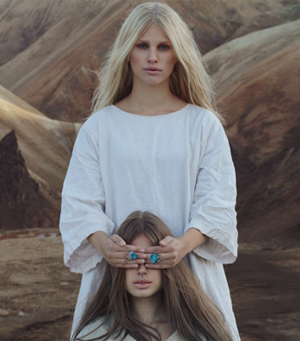 Bjørg 2012 Lookbook by Matias and Mathia

Matias and Mathias have worked for Bjørg before, producing a promotional video for the brand in 2010, entitled Time Away (bottom of the article). How did you work together with Bjørg this time producing Heresy? “With Bjørg being an artist herself, she respects us as equals when we collaborate. She is very conscious of the creative process and we are given the freedom (and responsibility) to shape our contribution under the same terms that she approaches her own work. She always follows her intuition and as it became apparent that the film would have to be an extension of the photo campaign and vice versa, she suggested that we should shoot the print campaign as well.”

What differentiates Heresy from your previous film for Bjørg, Time Away? “Both films explore certain themes through creating an atmosphere where the jewelry acts as a catalyst for the thinking that surrounds those themes. In the previous film, Time Away, we looked at jewelry in a more general sense, as something that stands the test of time and is inexplicably linked to memories of some sort. Whereas in Heresy it is more of a manifestation of this collection and how its aesthetic defies expectations.”

What role did the 2012 collection of Bjørg have in inspiring you when creating Heresy? “We felt that the collection represented a brave approach, in terms of standing out and showcasing a new way of thinking. So what does it mean to be a heretic? We began to explore the cost of going against the grain in a historical context. This was something we wanted to capture and put forward in the film. We felt that witch burning was the ultimate symbol for the persecution of people who do not obey conventions and it resonated very well with the mysticism and symbolic power of jewelry.”

The location looks amazing! How was it working with the team in the outback? “The girls showed great character by never complaining and going the extra mile in the freezing winds of Iceland. When we were shooting the stills they climbed volcanoes and crossed rivers, literally, to get the job done.”

Matias and Mathias’ Heresy film is also picked to be a part of Ben Trovato’s “Ben Trovato Selects” -night at FASH!ON/off Sunday December 11th. Together with respected names such as Ellen von Unwerth and Peter Lindbergh, Ben Trovato has been invited to the festival to present and showcase what we consider to be the best and most promising fashion filmmakers in the business today.

Here’s Matias and Mathias 2010 film for Bjørg, Time Away: